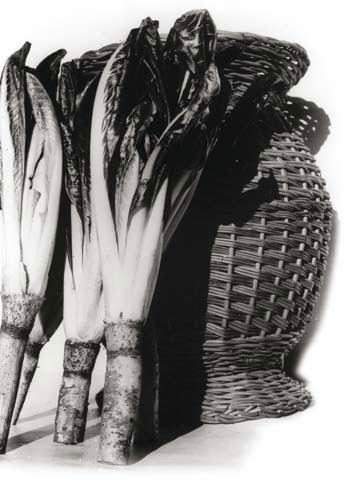 The spontaneous species called “Cichorium Intybus L.” has been present since the dawn of time, such as wild chicory, but it has been the continuous changes made to preserve it better, for grafts or even for unconsciously made variations that have made it become the precious and famous red radicchio of Treviso that is today, which precisely in the Treviso lands has found literally the “humus” suitable for its own.

If, historically, it can be unequivocally recognized that the first exhibition where the red radicchio of Treviso appears is made on 20 December 1900, organized by Giuseppe Benzi, an agronomist of Lombardy origin who moved to Treviso in 1876 as a teacher, not as clear as the exact origin of the whitening technique, two versions are the most accredited:

The first and most legendary is Francesco Van den Borre, who arrived in 1860 in the Veneto region from Belgium, specializing in the setting up of parks and gardens, and who is believed to have used on Radicchio fields the whitening technique, which is now widespread in Belgium. There is no definite evidence of this news, but many people refer to it.

The second version is that which believes that the peasants, with the arrival of the winter, had tried to keep the radicchio in the stables and that, by chance, they had noticed that instead of rotting some hearts of radicchio were indeed good and crunchy; having at their disposal the spring water useful to keep them always fresh, it is believed that they started this new cultivation.

The strong accreditation given to the first version is perhaps due to the fact that the Radicchio di Treviso looks like a flower, as Aldo Van den Borre (1886-1954), son of Francesco, wrote in 1924:“Here is a grass that is a flower. Treviso is altering this magnificent vegetable, which is the work of its land, its climate and its illustrious and patient people. Chicory is everywhere. But the grass of Theophrastus, the Hindu kasni, the red root of Milan, the kaiserscichorie of Berlin, the Witoof of Brussels, the archaeology of the Escuriale, the christmas salad of London have nothing to do with the Radicchio di Treviso: If you look at it, he is a smile If you eat it, it’s a paradise!”

Or, as he said in 1928 in the “Osterie Veneziane“ Elio Zorzi “Treviso radicchio is an edible flower: when it is brought to the table without first being seasoned, it seems, in the homemaker salad bowl, a bunch of orchids in a precious cup of porcelain”, or Maffioli will say masterfully in 1983 in his “Cucina Trevigiana”. The red, the dominant tone of moribund nature, rises in its growing freshness as on alabaster stems, singing a life that defies the rigors of winter and takes advantage of it “.